Home › Technology › Gadget to ‘Shut up’ the person on receiving end

Gadget to ‘Shut up’ the person on receiving end

How many times it has happen to you that you want the person speaking in front of you to just ‘SHUT UP’, but could not say that just because it can hurt him?

It has happened with me in past and I am sure must have happened with many of you out there. So finally here is gadget that will LITERALLY shut the person up. 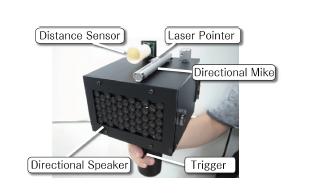 The research paper as published by Kazutaka and Koji Tsukada suggests that this gadget can be used to silence a person sitting up to 30 meters away from you.

“In general, human speech is jammed by giving back to the speakers their own utterances at a delay of a few hundred milliseconds. This effect can disturb people without any physical discomfort, and disappears immediately by stop speaking.”

The device works by recording its target’s speech then FIRING their words back at them with a near to 0.2-second delay, which affects the brain’s cognitive processes and therefore causes speakers to stutter little bit before silencing them completely.

The device is said to be working better when the speaker is reading aloud and doesn’t work on people making just useless noise like “ahhh”. The researchers suggests that this device can be used for silencing people making noise in public library and in group discussions where people normally try to interrupt the person giving speech.